Buying Links for The Enchanter’s Child: 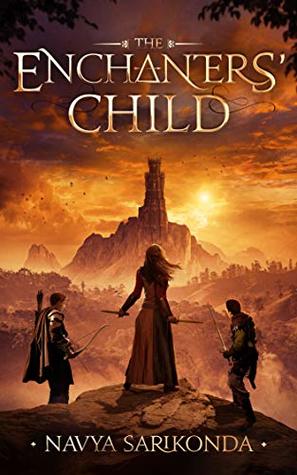 Wren has a secret. She’s the last of the Arobol, a group of magic-wielders. After her parents were murdered by a dark entity when she was young, she has been trying to discover who has killed them. However, it wasn’t just anyone; it was the Dark Sorcerer, a being who is believed to exist only in a fairytale. When an unexpected tragedy hits, Wren is forced to flee to town in hopes of finding the leader of the Gavreel Society, said to have information on her parents’ killer.

Zayne has been working for months to uncover the reason behind the dead bodies showing up in multiple towns and the mysterious symbol that is etched into their skin. As Trading Day approaches, he goes to meet with his Gavreel Society to formulate a new plan for uncovering the person behind these killings. Little does he know that he’ll find the solution in a girl, one who’s holding as many secrets as he is.

As they race to find the Sorcerer, each for their own reasons, secrets come out, powerful enough to tear them apart.

When I picked this book, I had no idea about the author’s age. After finishing the book, I read her biography and whew! I was blown apart right there–Not because, at such a young age, she has written a book – but because, at such a young age, she has written an engrossing, entertaining book–she’s merely a high-schooler! I don’t read young adult books–for me, the young adult books are meant for young adults only– I’ve not read Harry Potter series (despite being a big fan of Rowling’s Cormoron Strike series) so far–but I read The Enchanter’s Child in one sitting. It’s engrossing and it will keep you hooked until the end. I think it’s a wonderful book, and I’m not usually a fan of fantasy.

If I had to criticize anything, it would be about the lack of emphasis on the backstory. I guess it could have done with a bit more build-up. I would’ve loved to see the author gives more thought to developing it a bit more. But then, she’s so young, and for her age, she has already surpassed many experienced authors. She’s good when it comes to adding the surprise elements to the story. There are plenty of unexpected twists; when you think you know what’s going to happen, the author throws in another surprise for you.

Highly recommended, especially, to YA readers!

I love reading books and try my best to give an honest review. I'm mostly for mystery genre and love cozy, detective, whodunit, thrillers, crime, suspense, slow paced, fast paced, almost anything. Other than crime fiction, I read general fiction, literary fiction. I have had a love of reading since I was young. View all posts by coffeenreviews